Should Conventional Lenders Sign Onto Borrower’s Bill of Rights?

Banking is a heavily regulated business and as such, often gets the benefit of the doubt from the buying public, especially as the financial crisis fades from memory. It’s sort of like the U.S. Congress: everybody hates Congress, but loves their Representative in Congress.

During the rise of the fintech business/consumer lending industry over the past 5+ years, 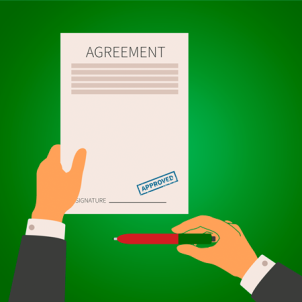 much of the public discourse about these companies focused attention on the  borrowing costs from some of these companies. Fintech lenders are largely unregulated, and stories about loans charging 40-50% up to 80-100% have not been hard to find. Many bankers I heard from liked to speak of their own lending company in terms of superiority, in light of more honorably serving prime customers at prime rates.

A few weeks ago this page reported about an assembled group of online lenders and advocates labeled as the ‘Responsible Business Lending Coalition,’ who announced the creation of the ‘Small Business Borrower’s Bill of Rights.’ These rights are principals of fair play that these participating parties agreed to adopt for client benefit in the face of a growing volume of complaints about the translucent–and sometimes shady–lending practices of some online funding sources.

The effort was in organization as the Federal Reserve was in the midst of a study concerning fintech lending and the Treasury Department convened its own inquiry to learn more about the industry.

But while reviewing the Coalition’s website again last week, I began to wonder: why don’t banks and other non-bank finance companies sign on to this campaign? Before flooding my comment lines with any moral indignation at such an idea, remember, I’ve been in this industry for over 35 years, so I would challenge you to think back at some of the ugly things you’ve probably witnessed too.

The Small Business Borrowers’ Bill of Rights outlines six key rights that the coalition suggests all small business borrowers deserve as a matter of both best practices of the financial service industry, and fair play so far as dealing with people that do not regularly engage in financial matters day-to-day. These rights are:

The Right to Transparent Pricing and Terms, including a right to see an annualized interest rate and all fees

The Right to Non-Abusive Products, so that borrowers don’t get trapped in a vicious cycle of expensive re-borrowing.

The Right to Responsible Underwriting, so that borrowers are not placed in loans they are unable to repay.

The Right to Fair Treatment from Brokers, so that borrowers are not steered into the most expensive loans.

The Right to Fair Collection Practices, to prevent harassment and unfair treatment.

Read more about the bill of rights and the coalition here.

What’s in that list of rights that commercial banks and non-bank finance companies  don’t already do? Plenty.

For starters, most non-bank finance companies (ABL, factoring & leasing) generally do not provide pricing transparency when their financing is advanced without a comparative disclosure as to what it really costs. The ABL industry may charge “Prime+” rates on the face of the note, but their multiple junk fees added to transactions effectively pushes average relationship yields routinely up beyond 30 percent. Likewise, leasing companies duck  behind “lease factors” to hide the interest-equivalent charges they collect.

Secondly, I would point to the right of non-abusive products, and remind you that about fifty banking companies issue millions of credit cards that regularly encourage the borrower to repay this high-priced, revolving debt over a continually extended 36-year term. Yes, that debt is generally consumer debt, but we all know that 99% small businesses get started or sustain themselves on credit card borrowing.

As for responsible underwriting, I don’t think the majority of lenders of any stripe fail this test, but we all know outliers who certainly would. In metro Atlanta, it’s easy to name dozens of banks (since failed), which in the years leading to the crisis, levered up borrowers to unthinkable levels of debt that they couldn’t repay. And often, these banks included SBA as an inherent victim to abusive lending. It happens.

And finally, as for fair treatment from brokers, having had my own loan brokerage company for seven years, and later engaging with many brokers as a BDO and then bank president, I can tell you first hand that many lenders simply turn a blind eye to some of the bad actors in that business. So long as it doesn’t threaten their loan, I’ve seen many bankers exhibit the attitude that “it’s none of their business.” I can’t speak for the non-bank world, but disagree with that attitude in banking.

Granted that banks are better than most about complying with inclusive access and fair collection practices, except those selling defaulted debt to rogue collection agencies.

The original fintech lenders, advocates and loan broker that developed and signed the Small Business Borrower’s Bill of Rights included ACCION, Fundera, Funding Circle, Lending Club , Opportunity Fund, Aspen Institute, Small Business Majority and Multifunding.   This group challenged other peer competitors to also recognize these rights and publicly sign on to adopt and adhere to the rights as industry standards for dealing with small business borrowers.

Most small business lenders I have met already comply with the principles espoused in the Small Business Borrower’s Bill of Rights, and I believe most reputable banks have a credit culture supportive of these practices.

So what do you say: why not add your name to the list?